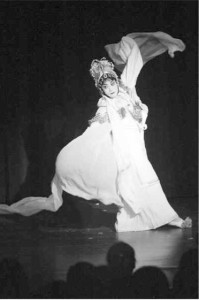 Last week, I was the final speaker in our department’s grad student association speaker series (which also marked the last day of classes for AY 2015-2016, hooray!), called “Rough Cut” – designed to expose current grad students to research-in-progress. I had signed up much earlier in the semester, and as the date drew closer, I wondered: did the grad studentsÂ really want to hear about my interventions into PRC history and the cultural history of 20th c. China? Sure, listening to how fully (or semi-fully) fledged scholars are working through projects-in-process is useful – but most of me was saying ‘This has very little overlap with what most of our grad students do, and they will listen politely and ultimately leave not having learned a whole hell of a lot of useful stuff.’ They’re a very niceÂ bunch, but subjecting people I like to 20 or 30 minutes of talk on something they have little background in seemed … selfish, to say the least. So I decided to do something a little different – instead of talking through the intricacies of my research in process, I’d walk them through how I got from a 2nd year research paper, to a dissertation, to a manuscript in progress. At the very least, I might be able to drop a few pieces of advice that might prove useful – even to people doing work that’s radically different than mine, in area and in emphasis. It was quite possibly just as useless as talking about my research, andÂ only my research; but the intent was, at the very least, to be a bit broader and more useful.

It went OK. Luckily, I was the only speaker on the agenda, because I blathered on for 40 minutes (the ‘ideal’ time was 15 or 20 – I’m usually much better at reining myself in, although I did know I’d be the only speaker). While chewing my nails and worrying at a colleague afterwards, she said: ‘You managed to sum up your entire grad career in 40 minutes, which is pretty good!’ I did gallop through quite a lot, both in terms of explaining my own research and (the more important bit) talking about process and what I wish I’d known whenÂ I started writing a dissertation.

Preparing the talk providedÂ a niceÂ bit of reflection and perspective, which I badly needed at the end of a semester (academic year, at that) that left me feeling pretty demoralized and defeated. I’ve been in pretty bad headspace since last fall & have been making concerted efforts to get myselfÂ out (not the easiest thing, but I’m glad some healthy habits are starting to stick!), and it’s easy to get trapped in those negative feelings. So throwing together a PowerPoint on my grad school career helped refocus me on my mss (and this is the ‘Summer of the Book,’ since the mss needs to be done & ready to go out by August), and think about all the good stuff I’ve done since I got to grad school in 2007.

In any case, amongst all the other stuff I talked about – the need to be strategic, the need to think about how you’ll sell your project to scholars in a variety of fields, the necessity of getting critical (and sometimes painful) feedback – I talked about having talismans for your work. Things you can brush up against while in the thick of things, that have meaning forÂ you, but not necessarily for the work as a whole. This may not be a necessity for many people, but it’s necessary forÂ me. My talismans, as I explained to the seminar room, are literary: I showed them the epigraphs from my dissertation, which include a line about archives from a not-terribly-distinguished book on the murder of the Russian imperial family in 1918, a line from the terribly distinguishedÂ Lantingjixu by Wang Xizhi, and a good clip of T.S. Eliot’s “Burnt Norton” fromÂ Four Quartets (I’ve written a bit about the latter – well, hell, the otherÂ two, as wellÂ – at various points in this blog). I don’t think talismans need to be literary, but mine are – they help me recenter myself when I’m lost in the chaos of research, writing, and editing. 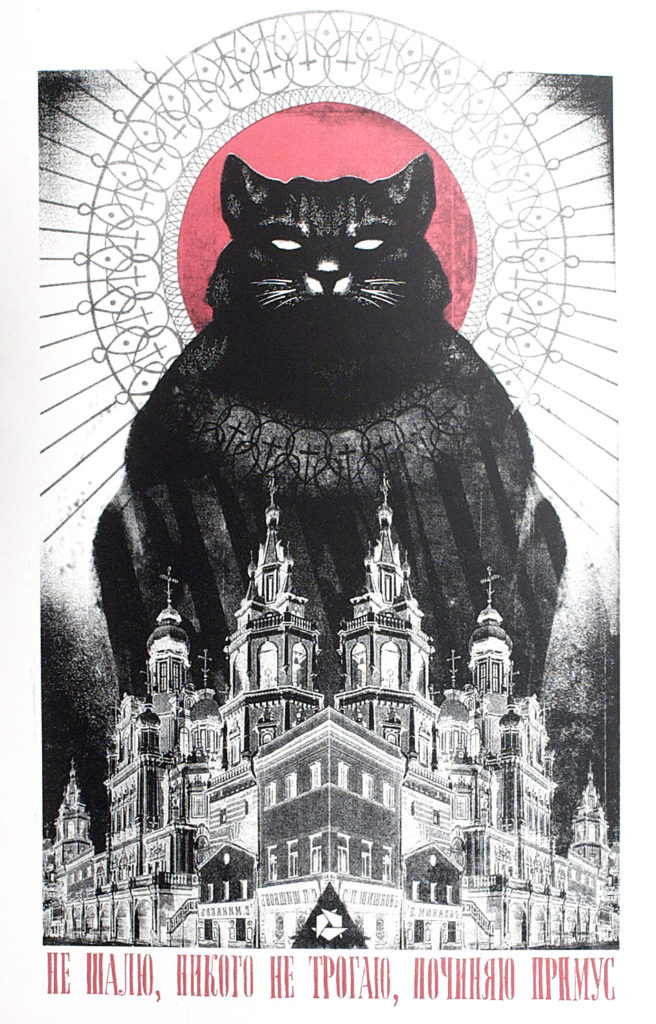 I ended the whole presentation with another, newer talisman – one of the most famous quotes from Bulgakov’sÂ The Master and Margarita, “Manuscripts don’t burn.” At the end of my first year at MSU, a colleague recommended the novel to me – I’d never read it, and in truth, have shied away from fiction for years (that goes for films, too). Documentaries, non-fiction, non-Chinese-history-monographs and the like, fine – I have consumed a lot of those since I started grad school, but my affection for fiction had really waned.Â The Master and Margarita was one of the first novels I’d read inÂ years, and IÂ lovedÂ it. Part of it was the description of life in the Soviet socialist literary system: the first few chapters wereÂ so on point! I recognized all of it. I remember sending an email at 3 AM – having been up a good chunk of the evening and wee hours reading – to the colleague who had recommended it, saying how fabulous it was. The rest of the novel was just magical, and absurd, and utterly wonderful. I recently passed it off to a friend who just finished her dissertation a few weeks ago – she said she was overwhelmed with choices of novels to read now that she hadÂ time, and so I handed over my copy of Bulgakov’s masterpiece.

In any case, since “Manuscripts don’t burn” is such a famous line, it feels trite to pick it as a talisman, and yet – it’s oh-so-appropriate. I use it to remind myself that as much as I love my wonderful intellectuals, they wrote and said and did things that (whether I agree with it or not) ran afoul of powerful elements of the CCP. Those “manuscripts” don’t burn. I owe it to them to tell their stories, warts and all; you can’t expunge the flip side of the ‘brave intellectuals standing up in the face of Mao’s vision run amok,’ which is, ‘Oh my god, what were they thinking, criticizing the ’emperor.” Often when I’m writing through the 1960s, I find myself cringing as one does when watching a horror film: ‘Oh no, don’t do that,Â don’t say that, oh god.’Â Obviously I come down on one side of that particular history, but their story is more compelling by the fact that theyÂ must have known what they were saying and doing. To render Meng Chao’s ultimate fate evidence of nothing more than theÂ capriciousness of Mao et al. is ultimately, I think, a disservice to someone who wrote andÂ publishedÂ (in multiple versions!) lines like:

Even if we’re going to play the whole ‘Oh, they were talking about theÂ prime minister, not theÂ emperor, ergo weren’t talking about Mao himself!’ game, putting into publicÂ writing (and performance!) – even just a few lines -Â worrying about starving people who are in desperate situations while government officials take pleasure in partying atÂ West Lake is pretty provocative in the early 1960s, during and after the disaster of the Great Leap Forward &Â resulting famine.

So that manuscript doesn’t burn. None of them do. That’s not a bad thing.

However, I didn’t end my talk on that morose note; I ended it on a slightly more upbeat, worthy-of-a-bad-motivational-poster, yet still melancholy note.Â Our manuscripts don’t burn, and that’s also not a bad thing. It’s worth reflecting on failures, and remembering that every misstep along the way to a journal article, dissertation, or mss (or job entirely out of the academy) has something to offer. I have spentÂ so much time writing things that wound up shuffled into a file somewhere; so much time reading sources that didn’t pan out (bad enough in English; triply painful in Chinese, at least for me); so much time roughing outÂ projectsÂ that don’t pan out as you anticipate. Time spent building courses that don’t work. Time picking out readings that don’t work for courses that kinda do. Etc. etc. etc ….

Every academic career is, in some measure, a history of failure. Some more so than others – often, as has been frequently discussed, due to nothing other than the vagaries of the market. But a Princeton professor’s recent “CV of failures”Â made some traction on my lists in various places, and it is potentially useful to meditate on, I think (of course, as a follow-up oped in the same paper pointed out, “Only successful people can afford failures” – which is also true, and deserves as much rumination. It’s a lot easier to publicizeÂ your failures when safely ensconced in a tenure-track position (having come from a position of relative Privilege) at an elite university – or a non-elite one, for that matter). But ultimately, few people come out of the gate and have no stumbles, in any career. As much as I feel like a bad motivational poster for saying so, IÂ have learned a lot from my failures, big and little. I have been blessed in my career since starting grad school, but I’ve fallen flat on my face plenty. The successes I’ve had have generally felt like completely bizarre, totally unexpected bright spots in the midst of disaster. And that’s not just my anxiety speaking: there were several times when senior people expressed some measure of surprise of ‘Oh, that worked out for you!’ at critical points in my career.

It’s finals week, so I’ve been catching up on grading, getting a lot of work done, and also tried to wind down from a 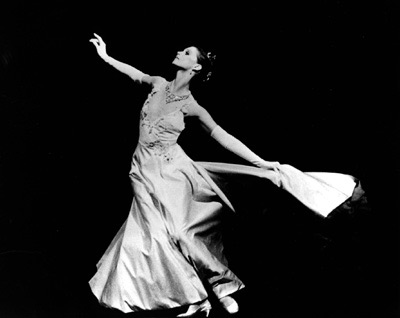 stressful year by watching documentaries and other things that make me happy. There’s a wonderful line in the documentaryÂ Elusive Muse (the subject of which is Suzanne Farrell, the last great Balanchine muse – I’ve written about that a bit here, too), which I watched a few days ago while zoning out on the couch. The choreographer Maurice BÃ©jart, who took Farrell and her husband in after they leftÂ the New York City Ballet, had this to say on why Farrell was one of the great dancers of the 20th century (and probably ever):

She was different … and she was even different from the Balanchine girls … she was completely different, and – I was very surprised – she had a freedom of movement, with a very clear technical power. But you never felt the technical, you felt the freedom and the musicality. I mean, she’s like – she’s like a violin, I mean, the music comes out from her body.

I’ve heard BÃ©jart utter those lines – and they are memorable ones, I’ve quoted them (badly) to people at several points – any number of times, but something clicked for me in the past two weeks. I want to be technically skilled; but I don’t want people to see it necessarily, because I want to weave a great story. I want it toÂ come out from my writing; I want to be an instrument of a sort – I want the story to come out, whichÂ reliesÂ on the technical power, while rendering that relatively invisible.

Talismans: they’re important, no matter what you do. And … manuscripts don’t burn. Farrell was great partially because she simply – after a point – wasn’t afraid of making mistakes, which made her highest highs (which were supreme!) possible. A useful lesson, hard as it is to remember when tenure and the judgment of various people (the vast majority of whom aren’t in your field & want to know what you’re not doing XYZ to contribute in ABC ways) are breathing down your neck.