Being a Chinese historian – or, I should probably say, learning to be a Chinese historian – can be great fun, and also really frustrating, and fun and frustrating all at once. Â Like most things in life, I guess, but I’m occasionally confronted with obstacles that make me wish I’d taken my mother’s initial advice and gone into some other field like … 17th century French history. Â French: such a sensible language.

I’ve been translating a play. Â This is the first time I’ve ever translated a whole play from Chinese to English, and also the first time I have really taken a foray into Ming dynasty literature. Â I’ve read a fair amount of poetry, but even long ci – lyric poems – are reasonably manageable.Â It’s been quite the experience thus far, and as I have recently decided to go to Beijing in April – after a month of March that is going to be crammed with family visiting and other things drawing my attention away from work – I’ve redoubled my efforts. Â Partially because I just want to get this sucker done, partially because one of my friends I am terribly excited to see in Beijing also happens to be quite an amazing talent when it comes to the Chinese language – so I’m hoping to lean on her brilliance a bit, and go over the rough spots and smooth things out, as we catch up over a bottle of wine. Â But of course, I want to have the best and most complete work I can possibly manage done so we’ll just have to tweak things here and there.

Though the non-aria (non-poetry) bits are actually quite clear and understandable, some of the arias have proved significantly more difficult. Â The standout section (at least in terms of ‘I … what?’ reactions it garners) follows approximately this pattern:

Yes, a smashed jar that appears to have something to do with sour somethings (potentially pickles). Â A jar in the middle of an aria that is otherwise concerned with a mopey wannabe scholar official. I exhausted the dictionaries I had at my disposal at the moment – wishing I had my trustyÂ Far Eastern, but alas, it is in a box in storage in San Diego – to no avail. Â Googling the phrase was unhelpful, kicking back only Japanese websites having to do with food.Â Â So as a temporary measure of last resort, I brought the play and my early, rough translation to a Chinese friend of mine, who is generally a font of information – he can usually instantly correct the areas I’m having trouble with and immediately knows the ‘answer’ to the meaning behind the phrase.

“What in heaven’s name is this talking about?” Â I was expecting an answer that would make me feel silly for not immediately seeing it, as most of these are (“Oh, the jar refers to the Duke of Zhou’s issue with his nephew that’s quoted in the …” et cetera). Â But instead of having a quick response, he looked. Â He read the lines leading up to it (which I’d translated just fine). And looked again. Â He read the lines below it (which I’d also translated just fine). And looked again. Â He had been kind enough to drag out his big, most frequently used dictionary to Starbucks, so we consulted it. Â We paged through. Â We looked up characters that it perhaps could be (one of the frustrations of older drama is a somewhat “inconsistent” use of characters – frequently, homophones will be used interchangeably, which makes for great fun if you’re not paying close attention). Â We flipped things around. Â Nothing. Â Clearly, more serious linguistic artillery was needed.

So I queried a few people on good dictionaries to have in your collection, particularly when dealing with texts of this nature & was told to pick up the Peiwen yunfu ä½©æ–‡éŸµåºœ, a dictionary originally compiled in the early 18th century at the behest of the Kangxi emperor. Â It’s a rhyming dictionary. Â It’s hard to use, they said, but very useful. Â So I tracked down a copy, and it arrived – all four volumes, an early 1980s edition. Â Now, I consider myself a pretty well-read person, and I’ve dealt with fearsome looking dictionaries in a couple of languages. Â At the same time, one of the fun things about being a Chinese historian is getting to build up an interesting collection of dictionaries – some are really more like encyclopedias than “dictionaries,” but still. Â So it’s a dictionary, how bad could it be? Â They’re meant to be useful, usable reference works – those essential things we turn to when things like … the handy dictionary on the iPod isn’t cutting it. 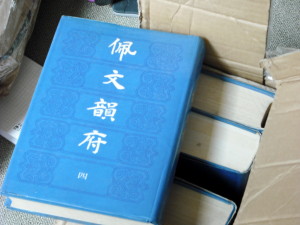 I mean, that doesn’t look so bad, right? Â Maybe a bit big, but dictionaries sometimes are – just look at the OED, after all. Â My first inkling that we might have “issues” is when I discovered volume 4 (the one on top of the box) – the index volume – was in Four Corners, a system that I don’t understand, and neither do most of my friends who are in their 20s. Â Luckily there is a small section for stroke order, so all was not lost (there’s also a handy Wikipedia page that lists a number of characters and how to find them in Four Corners, so I’ve got that bookmarked).

However, I flipped it open, curious to see what it looked like. Â Oh no. 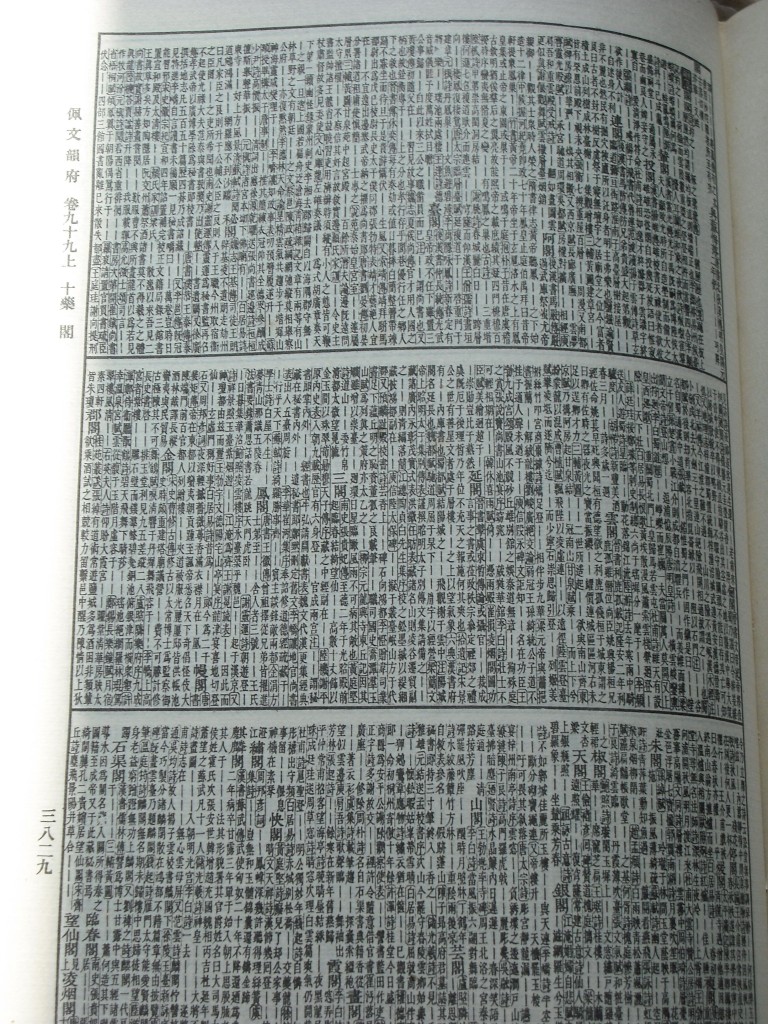 Not only is it somewhat more difficult for me to find things in the dictionary to start with (due to a limited – at least by some standards – index), the dictionary itself is in tiny print.

But not just that, oh no. Â No, that would be too easy. 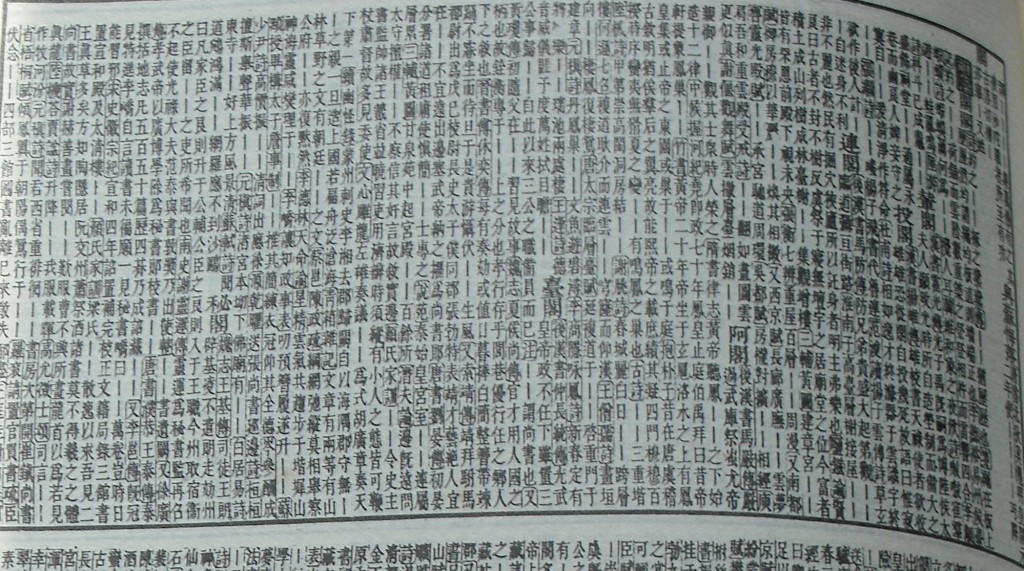 It’s in traditional characters – which I usually prefer – but simplified characters really show their strength when you’re dealing with tiny crammed text that isn’t of the highest quality, print wise. Â It’s unpunctuated, of course – thankfully, it’s mostly a big list of various examples culled from the classics, and the titles (or indication of whose poetry the example came from) are helpfully, if faintly, circled. Â If this is an indispensable tool of the antique translation trade, I thought to myself, I am very glad to be a modern historian, even more glad that I primarily deal with the PRC, and practically ecstatic that I research videogames, as well.

I flipped back and forth between volumes. Â I looked at the index and found a few characters – a few phrases, even – I was on the hunt for. Â I found them in the Four Corners part of the index, and looked up their page numbers. Â I went back to the dictionary volumes. Â I looked again. Â I put my nose nearly on the page so I could parse the characters. Â I could even understand the text. Â But what, exactly, I was supposed to do with it eluded me.

So I’m now in possession of a dictionary (a pretty expensive one) that I know will be very useful – when and if I figure out how to use it. Â To that end, I’m lugging a volume out to coffee tomorrow so a friend can hopefully shed some light on what in the world I’m supposed to do with it. Â Yes, we historians can be awfully wild at times – who needs a life when you’ve got a Qing dynasty dictionary to get acquainted with?

Maybe we’ll finally solve the mystery of the smashed jar that may or may not have anything to do with pickles. Â I’ve exhausted the combinations I can think of, and I can’t find a trace of the phrase anywhere – but then, I don’t know how to use the dictionary. It is possible, I suppose, that it will be missing from the Peiwen – and we’ll have to go consult some even more terrifying dictionary (I can only imagine). Â In the meantime, I’ll simply keep my fingers crossed that this is a little bump in what will prove to be a long and fruitful relationship between me and a dictionary that was first compiled 300 years ago.

(I suspect somewhere, the spirit of a certain emperor is probably having quite a good laugh at my expense)