The semester is (finally) winding down here: it’s been a strange one on a number of levels, one that’s sharing a startling number of parallels with the fall quarter of my second year of grad school. It certainly hasn’t approached that level of misery, but I do find myself taking odd comfort in the similar patterns. I don’t consider myself a particularly superstitious person, but sometimes the universe just seems to be telling you something … one might as well turn an ear towards it, even if you’re only listening half-heartedly.

While feeling like I’ve been balanced on the edge of a nervous breakdown, I’ve been sallying forth with teaching (largely a great joy, if one that still makes me anxious here and there) and fussing with my dissertation-cum-manuscript in preparation for getting down to business with it after the semester is over. I’ve been ordering in books on inter-library loan, sorting through archival documents, shuffling pieces of the dissertation around in new Word docs prepared for eventual chapters, and the like. I’ve been mentally steeling myself for the slog of revision in general, and in particular having to dive back into writing about topics that often make me incredibly upset and depressed. I spent the past year or so concentrating on everything & everyone but myself, or so it seemed at times, so I’ve been trying to recenter and think about what would make me happy, and then just do that (uh, within reason, of course). I’ll need those reserves for getting through some of my more trying materials.

I had a philosophical debate with a good friend over iMessage the other day, the gist of which was whether or not being unhappy – I guess “depressed” would be a better clinical term – did make us better scholars, or just made us feel that we were better scholars. I said that I think of myself as a pretty sensitive person in general, prone perhaps to feeling more about things than is warranted (that goes for history and personal life), and while I would like to be able to shed some of that, I won’t ever give up my conviction that the fact I’ve spent a not insignificant amount of time weeping over dusty sources does, in fact, make me a better historian than if it just rolled off of me (I conceded that it’s possible I’m overstating the positive impact of this on my prose, but I still feel like there’s some kind of power derived from those deep emotions). It would be nice to be less sensitive to stuff, but I wouldn’t give up being sensitive over my things, my research, my intellectuals even if it meant the vagaries of life would just roll off of me (I am endeavoring to get life to roll off my back more easily, though. Still!). That doesn’t mean I think it’s inherent to being a talented scholar; just that for me to get my best work out, I think there needs to be some of that powerful – often painful – emotional connection. 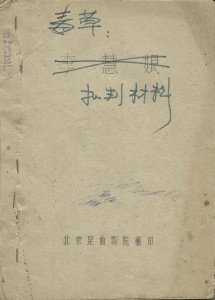 A few weeks ago, in the midsts of feeling pretty physically terrible (never a good position to be in if one is having to do mentally taxing things), I was preparing a lecture on the Cultural Revolution & idly going through documents in my database. I like showing my students the detritus of my research – generally images of this, that, or the other, something where I can spin a good, quick narrative and show them some piece of the past that I have, that I’ve laid my hands on. In this case, I hit upon Meng Jian’s heartbreaking post-Cultural Revolution reflections on her father, Meng Chao, and his famous ghost that brought so much grief to the family. The whole essay is powerful, but the end often moves me to tears (and I have read it many, many times since I first saw it in 2009):

For a long, long time I did not dream; the strange thing is that recently, I’ve dreamt often. In dreams I see my father, wearing a half-length Chinese padded jacket, a long, camel-colored scarf wrapped around his neck three times; he rests on a walking stick, his body short and thin and weak. As before, his back has a bit of a hunch to it, he drags his leg that was hurt during his persecution, and in his mouth he keeps the end of a long, long cigarette – one, then following that, another. He hobbles towards me, but is always, always unable to reach me …..

Waking up, I know that it’s simply a pipe dream. But – I miss him, I really miss him.

Well, I guess I must have looked pretty awful while reading the Chinese I know well enough to have memorized over and over, because my Wonder TA™ wandered by my office, then came back and stuck his head in the door. What’s wrong with you? (What isn’t wrong with me is the question I’ve been asking all semester, but never mind). I was rather overwrought, wept into my scarf, and said I just didn’t think I could get through a whole lecture on this stuff without blubbering like a fool. I’m not sure what it was about that particular day that made me feel so miserable, but to talk about something that can make me upset under the best of circumstances – well, I was dubious about managing it. I warned my students before launching into the lecture that the subject made me emotional, because I felt so tied to it through these dead people – these people I study – that it can be hard to view things without bringing those feelings up.

As it turns out, the lecture went fine – better than fine. I was in rare form indeed; while I like to think I’m a relatively engaging lecturer in general & don’t bore my students to tears, I suppose the fact I was clearly invested in the material made it so much the better (a student commented the next week that it seemed that I was “struggling” – not, he hastened to add, in terms of content mastery, but to keep my emotions in check). A student who has taken several of my courses (and has seen me lecture on the Cultural Revolution twice, albeit in different circumstances) wrote me a brief, but very touching, email the next day, saying that it was clear I cared deeply about the material and it really brought the history alive. One of the highest compliments, I think, a student can give a teacher. I think it’s good for students to see that we’re attached to this stuff (that doesn’t mean I have any desire to blubber through a lecture, but illustrating that this isn’t ‘just’ dead history is important to me!).

We are lucky at MSU to have a ridiculously talented Japanese environmental historian in the form of Brett Walker. I still remember reading his first book (Conquest of the Ainu Lands) my first year of grad school, in my Japanese history seminar. I was quite surprised when I flipped the book over & it noted that he was (at the time of publication) an assistant professor of history at Montana State University. “Montana State has Japanese historians – of the caliber that we’re reading in seminar?” (little did I know). One thing I particularly like about his work is how strongly the I comes through. We are so used to erasing ourselves from our scholarship, in some respects: not I did this and I felt that and I have this relationship to my subject (that would be biased!). Of course scholarship needs to be more than the I, but many of us shy away from putting the personal in our narrative. Brett is not ashamed to weave personal experience into history, and he also doesn’t pretend to be totally neutral on the subject. In his book Toxic Archipelago, he speaks of watching video of patients with Minamata disease (a neurological syndrome caused by mercury poisoning), and says:

I read that line for the first time while tucked up in bed, rather sick, in a fancy San Francisco hotel room in 2013. It has stuck with me since. I hope I will be brave enough one day to really put the I in my scholarship. And even if I cannot bring myself to write in such frank terms, I hope my affection and deep respect for these people – forever out of physical reach to me – comes through in my words.

I think I will always be a bit melancholic while getting my best writing done: I write best at night, at quiet, dark hours. It’s just having a personal witching hour of sorts, I suppose. I can sort through dull archival documents in the daylight just fine, but when it comes to writing through them, I want to be seized by inspiration and have the world just feel right for spinning those kinds of stories (selfish, I know – and probably not the “most” productive way to work). I would find it downright strange not to get a bit sad when trying to figure out how to draft narratives of largely-forgotten lives that came to bad ends. Perhaps that just makes me a mopey person, but I think I am better for feeling rather invested in these people I write of: if that means the occasional crying fit or wandering the house listening to music that is by turns happy and sad, well, I’ll take it.