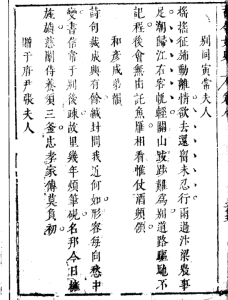 I bought a wondrous anthology while living in Taiwan, back in 2006; it’s calledÂ Women Writers of Traditional China (I’ve written about it before), and at the time, it seemed like it cost a bloody fortune (little did I know how quickly my spending on books would accelerate in the years after that!). I teach with it now, and while I can’t say my students always love the same things I do, nor can I say I do a great job teaching with it (yet)1, I’ve had enough good responses to think that I should keep trying to teach with it. I nearly fell over when a student – who had been in my lower division course & read some poetry of Qiu Jin ç§‹ç‘¾Â there – excitedly told a classmate in my spring semester gender course about that badass revolutionary woman poet, and seemed genuinely pleased when I said we’d be reading her again (as I’ve noted before, I actually have a deeper appreciation for her friendÂ Xu Zihua å¾è‡ªè¯, but I get the appeal of Qiu Jin, in all her beheaded revolutionary glory). In any case, it was really important for me at the time – something I enjoyed spending a little time with every day, a bit of an inspiration. My Chinese was awful, butÂ someday I’d be able to read all that (and, with some exceptions, I can, though I’m woefully out of shape when it comes to producing elegant translations – one reason I often use examples from the anthology when writing here).

I have a tendency towards being hard on myself, and getting in a pretty vicious cycle of berating myself for perceived failures and being unable to get out of it, and generally just feeling pretty bad at everything that counts for something. I spent aÂ fair bit of time this summer pouring effort into other people’s work, and trying really hard to be positive and helpful and supportive and say lots of nice things (along with the ‘WHY ARE YOU DOING THIS AGAIN’ marginalia). As easy as it is for me to get into a self-flagellating mode, I really hate to see people whose work I respect doing the same things to themselves – no matter how minor – so I do try and swoop in with a kind comment when I can. But it’s hard for me to balance that with feeling pretty terrible about myself, andÂ sometimes the balance gets really upset. I think I’ve comported myself pretty well the past year, despite being anxious aboutÂ my ability to doÂ any of this, and my fear about fledging the grad school nest, and I guess the past three weeks of being pretty hysterical and unable to keep stuff together are the culmination of a fulfilling, but utterly terrifying, year, and an oddly exhausting summer.

In any case: what does that have to do with poetry? In low points, I often find myself reaching for my poetry books. This anthology is living in my office, so I’ve been tucked up in bed the past few days nosing through the Chinese originals of some of these women poets, and also more standard fare – Xin Qiji è¾›å¼ƒç–¾, Wen Tianxiang æ–‡å¤©ç¥¥, the Tang 300 å”è¯—ä¸‰ç™¾é¦–. Â It’s one of those outrageously self-indulgent things: I know it’s probably going to make me even more upset, but there’s a certain pleasure in throwing salt into the wound. And sometimes, I can just lose myself in the rhythm and not think too hard for a while, other than playing with translations in my head.

But I like being reminded that certain sorrows are just a fact of life, and they were a fact of lifeÂ then and they are a fact of lifeÂ now and this too shall pass. Chinese poetry is full of parting (in a way I don’t remember from, say, the great Roman poets): Li Bai writes of it often (one of my favorite lines is from his é€å‹äºº, Seeing Off a Friend: è•­è•­ç­é¦¬é³´,Â the ponies cryÂ xiao xiao), for instance, and for all we think of Chinese women as cloistered, locked in the house somewhere, with no life other than trying to carry on the family bloodline and raise the next generation and deal with household things, they write of itÂ a lot. And not just in regards to husbands or lovers, no: one reason I was initially enthralled with the great women poets of the Ming-Qing period is because of the networks (often familial, but not always) they created. You can see a lot of that in the big anthology, and tracing the connections is neat. It’s also oddly comforting, when I’m terribly homesick for some place that never was, and missing my friends that are scattered across the globe.Â

At least we can get on Skype, I remind myself. We’re not confined to writing letters (though of course, writing letters has its own charms – a dear friend is an inveterate postcard sender, which is one of many things I love about her. I always look forward to the postcards from her that arrive when she’s been traveling. They are taped on my office wall, and make me smile when I can see them, partially because you’d never know there was a lovely affectionate message on the other side). I’m not alone, and I do have people that care a great deal about me (and I about them), and talking to them is alwaysÂ a bright spot on days – or during weeks – when it feels like everything else is a disaster andÂ I’m a disaster and myÂ research is a disaster and my teaching’s a disaster andÂ how did I manage to make it this far. 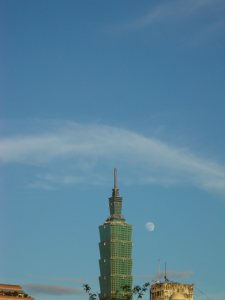 When I was 23, I sat in my favorite restaurant in Taipei at the end of a massive dinner with friends who were leaving, and having consumed a lot of Asahi and a lot of lamb chops and a lot of other delicious things, we sat over our beers and the weight of the evening kind of settled in. We smoked our cigarettes and drank our Asahi and at some point I burst into tears, because I already missed them. I quoted a bit of Chen Deyi é™³å¾·æ‡¿Â Â (though my Chinese was not yet good enough to do it in Chinese): “Not knowing when we shall meet again, let’s write letters./Looking at each other, we only pick up cup after cup of wine”2 åŽä¼šæ— ç”±æ‰˜é±¼é›ã€‚ç›¸çœ‹æƒŸä¼é…’é¢‘å€¾ã€‚Â If I had known that goodbyes were going to become such a standard part of life, that writing letters – well, long novellas of emails, in my case – was going to be how I maintained connections to people I loved most, I don’t know if I would’ve gone to grad school. I wonder sometimes if I’m just shy enough – and get just attached enough, just quickly enough – that this was a really unsuitable career path for me. On the other hand, it is a great joy, havingÂ all those people in my life who I wouldn’t have met otherwise.

If the past decade of constantly feeling like I’ve been flung off the deep end & everyone’s waiting to see if I drown or not has taught me nothing else, it’s that while I am prone to fits of panic lasting weeks when I don’t have other things to distract me, sometimes culminating in spectacular miniature breakdowns, I’ll be over it soon enough and things will keep moving forward (I will keep moving forward). Classes start on Monday, and I’m looking forward to teaching again, and have a regularÂ rhythm to punctuate my days. I’m already feeling a bit better with the knowledge that a summer that dragged on just a hair too long is quickly coming to a close. As miserable as I’ve felt the last few weeks, it’s not a feeling that will go on forever. I’ll put my poetry up until the next rainy day when I’m feeling a bit low (or until I need to make a photocopy for class), and get back to the thrilling world of 1950s Chinese intellectuals and ghosts and opera. Most of this summer was a pretty nice lark (an educational one to boot), and I shouldn’t let a few weeks of being unhappy overshadow that. Life will go on. I will write letters.