As much as I don’t miss large swaths of life in China, I do look longingly at kongfz.com, the world’s best secondhand book website, and remember with pleasure being able to purchase a lot of sources and other bits of historical detritus with a minimum of effort. These days, getting ahold of things that catch my intellectual fancy requires contacting several friends, a good bit of guilt on my part for imposing, a wait of months, shuffling money in between international bank accounts, etc. And in addition to online book shopping, there’s a lot of other places to buy secondhand books and other types of sources – places like flea markets (which have proven to be a real boon for a number of PRC historians – documents that seem like theyÂ oughtÂ to be in an archive, and sometimesÂ wereÂ previously in the hands of work units or other official places,Â sometimes show up)Â and book fairs. In Shanghai, the Confucian temple – Wen Miao æ–‡åº™ – is a beautiful, tranquil gem in the middle of an enormous, bustling city; it also happens to host a nice book fair each week. The sellers, spreading out on tables and on blankets, have everything – from foreign language books, to text books, to expensive coffee table art books, toÂ generic publications of a more recent vintage, to old things of many types.

In addition to owning a lot of 1950s and 1960s publications of various stripes, I have a small collection ofÂ lianhuanhua è¿žçŽ¯ç”», picture storybooks, or comic books (though they’re a different format than the ones commonly seen in the West). They are readily available, and at the Wen Miao, several sellers had heaps and heaps of them every time I went. They tend to be cheap – with a few exceptions, Cultural Revolution-era ones being rather desirable and thus, more expensive – andÂ tiny, and come in a pretty diverse variety of topics.Â I collect ones related to opera,Â of which there are a great many. Some of them are actually quite beautifully done – I have a few versions ofÂ Li Huiniang æŽæ…§å¨˜, one in particular has drawings that are lovely and evocative. Sometimes, popular movies would receive theÂ lianhuanhua treatment, with the text illustrated by movie stills. These I find much less interesting than their drawn companions, but does indicate something about the relative reach of certain kinds of films. 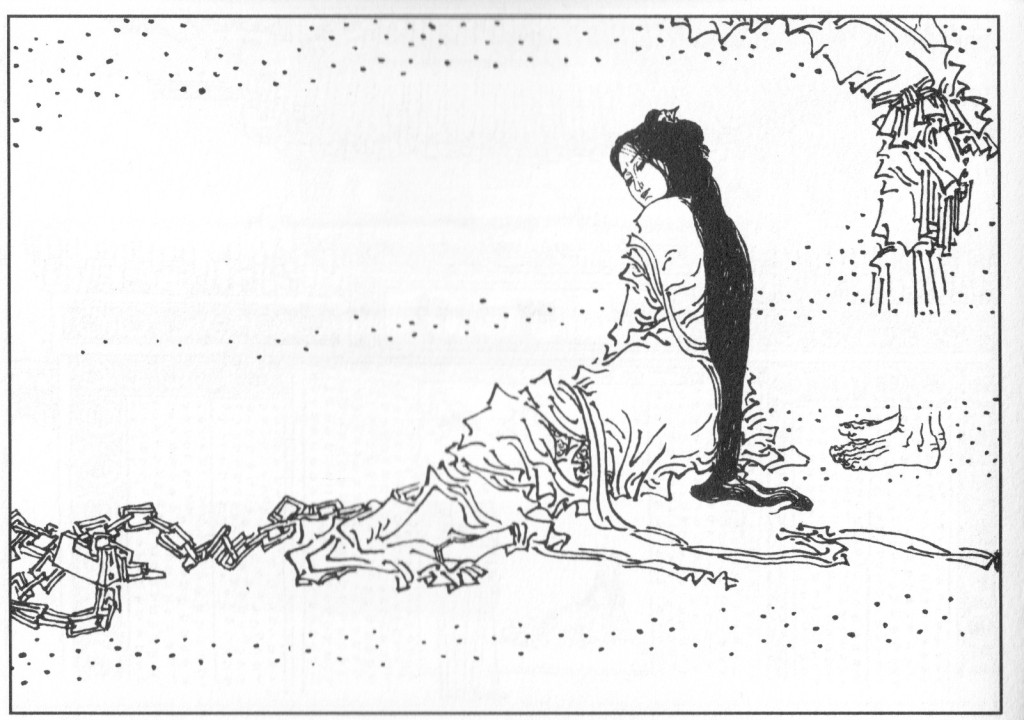 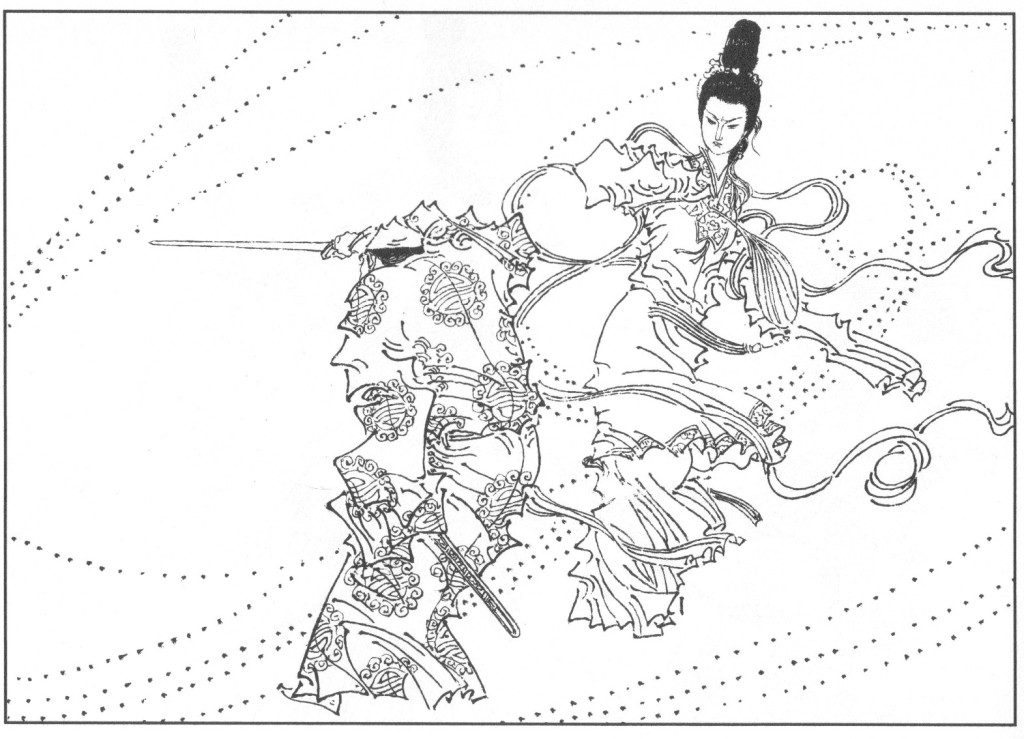 They don’tÂ really have anything to do with my research, but it’s interesting to see how different stories have been interpreted, which stories have been popular over the years, and so on. I don’t go out of my way to acquireÂ them (unless they are related specifically to one of the few plays I pay a lot of attention to), but at the Wen Miao, it was easy to buy them by the handful. Once, a seller who queried me about what I was looking forÂ in somewhat halting English reacted with surprise when I responded in Chinese that I was looking for operaÂ lianhuanhua, especially anything withÂ ghosts. He dragged a few things out (most of which I bought), then pointed to another one, which was neither opera nor ghost related.

It wasÂ Star Wars. InÂ lianhuanhuaÂ form. From 1980. It was simply so incongruous I couldn’t leave it behind. It also cost about a dollar (which is one reason I’m not terribly discerning with whatÂ lianhuanhua I pick up on whims!). 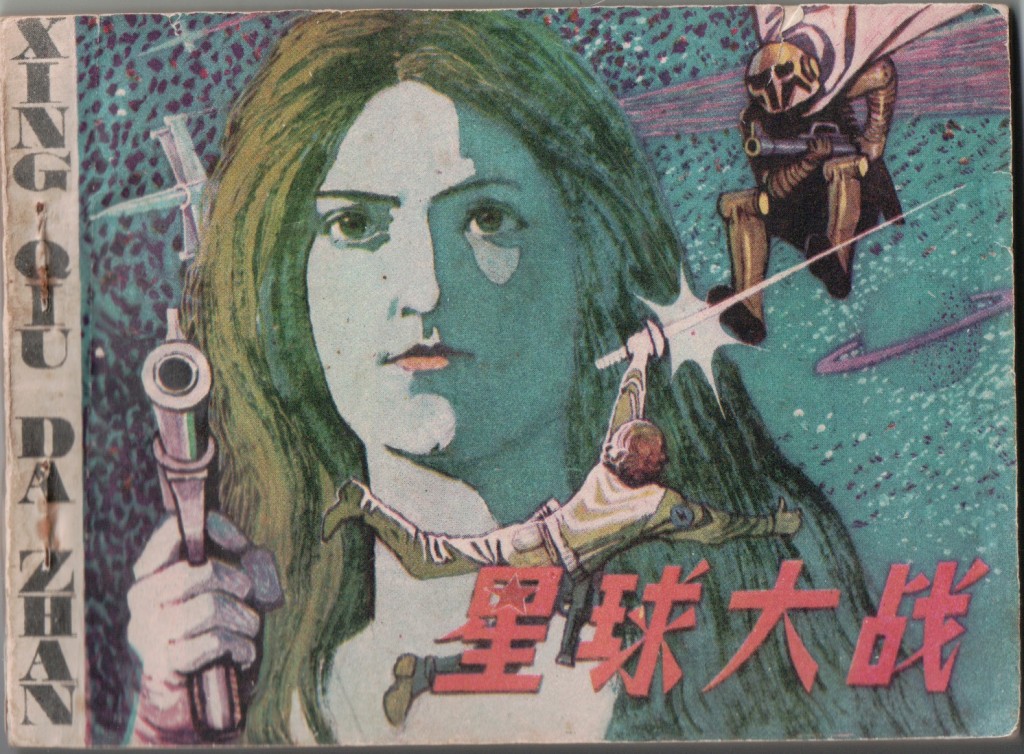 I’m always very interested in how culture circulates and changes through time and space – although my current research focuses on culture being reiterated and refashioned overÂ time, more simultaneous instances are also of great interest to me (if not quite an issue with 16th c. Chinese ghost plays). I suppose one of the defining features of modern Chinese cultural production (or perceptions of it, at least) is rather rampant IP violations. But at the same time people are amazed by the speed with which Chinese pirates hop on all sorts of (re)production, I think we often forget how quickly culture circulated before the internet. My students, for instance, are often surprised to discover how hip audiences in Shanghai were to Western films in the 1920s and 1930s, or music; and how these things flowed back and forth across the Pacific. Considering the delay in getting from point A to point B in an era where air travel – never mind the internet – was not the primary way of moving people and goods, it’s really pretty impressive.

So it shouldn’t be a surprise that in 1980, an enterprising press in Guangzhou put together aÂ lianhuanhua of a popular Western movie – one that had come out three years before in the US, and a year after that in Hong Kong (my guess as to where the “libretto” and stills, etc. came from: it seems pretty obvious from the drawings that the artists weren’t always working from an actual film, or really much at all). But we’re very accustomed to thinking of China at this point-or-slightly-before as being so very cut off from outside influences. And it’s true to some degree, the Cultural Revolution had just ended in 1976, shortly after Mao’s death, and China was culturally isolated (from Hollywood, at least) in a way it hadn’t been in, say, the 1930s. Â So I admit thatÂ Star Wars popping up amidst the classical tales and stories of brave revolutionaries did surpriseÂ meÂ a little bit, and I’m supposed to know better! But one presumes this wasn’t exactly the sort of thing Deng Xiaoping was really gunningÂ for with reform and opening (gaigeÂ kaifang æ”¹é©å¼€æ”¾).

The actualÂ lianhuanhua is a fascinating document, with weird bits sticking out here and there; but it’s also a fanciful imagining (I think) of American – or generalized Western – life, especially evident in the dinner scene where a duck (?) is being stuck into a toaster oven (!) & the table has not only a little hot plate, but a crockpot (or rice cooker) there, too. The artist also makes some amusing flubs – Chewbacca appears in some scenes in a relatively credible way, in others looking like an outtake fromÂ Planet of the Apes. It also often looks like something out of a Cold War-era propaganda poster, at least where the details are concerned. Were the actors really garbed in Soviet looking space suits? Was Darth Vader really pacing before a mapÂ bearing the location of the Kennedy Space Center? 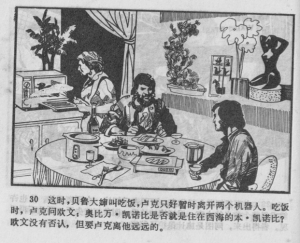 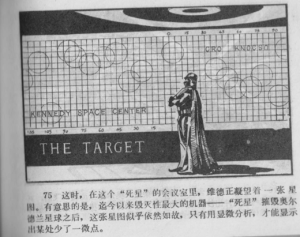 I was reorganizing my bookshelves the other day and found part of myÂ lianhuanhua stash, this little gem among them – I posted a few pictures on Twitter & Facebook, and a couple of people there begged me to put up the whole thing, so here it is. I just got a Doxie Flip scanner, since I realized (during the same bookshelf organizing session that turned upÂ Xingqiu dazhan) that a lot of my precious 1950s and 1960s publications are disintegrating (they are usually quite tiny – about postcard sized – so hauling out my big flatbed scanner seems like kind of a waste) & I should digitize them posthaste, which made it easy to scan this sucker, too. As a bonus, Doxie has one of the best, most user-friendly scanning interfaces ever – including a nice stitch function, which I made good use of – so while it took me a bit of time to put together the scans, it was a smooth process (Doxie also hasÂ amazing customer service – a few months ago, I whined on Twitter about my relatively youngÂ Doxie OneÂ workhorse crapping out & they sent me a brand new one right away – for free!). Click below for the PDF scans (broken into 4 sections)

(Brendan O’Kane also kindly cleaned up & OCR’d my scans – there’s some loss of detail, but it’s a much smaller & more manageable package -Â which can be found on his site)

As a further update, some people have dug up other Chinese versions, linked to in this lengthy forum post. It looks like this 1980 version is pretty competent artistically, all things considered!

Nick Stember, a grad student at UBC, has put together a fantastic post: Chinese Lianhuanhua: A Century of Pirated Movies. Nick is also posting a full English translation of the comic over at his website – Part 1; part 2; part 3; part 4

Jeremy Blum of theÂ South China Morning PostÂ also did an article onÂ lianhuanhua – this one in particular.

We’re also on io9! … And the Hollywood Reporter. And Rolling Stone. And the BBC. Â And a lot of other places, including (paper) newspapers! Who knew a humble shanghai Chinese comic book would get so much attention?