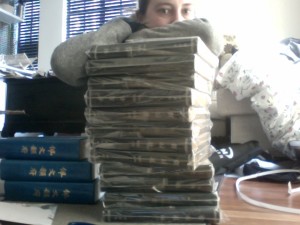 Or I should say, on the joys ofÂ kongfz.com.

One of the delightful things about living in China is the shopping (despite inflation worries, there are still a lot of goodies to be had on the cheap). Â For a bibliophile like myself, who likes to own every bit of material related to my research that I can get my hands on, book shopping in China is an unparalleled paradise. Â I was introduced to the wonders of the incredible Chinese book site kongfz.com in 2009 by a classmate, who kindly offered to pick up some purchases for me when she returned home to Guilin. Â My spoils from that first foray included a 1960s practice edition of Li Huiniang used by the Northern Kun Opera Troupe (Beifang kunqu tuan åŒ—æ–¹æ˜†æ›²å›¢) in the first performance of the opera Â – mimeographed, torn cover, printed on appallingly bad paper (that I now realize is pretty standard issue for mimeographed anything from 1950s and 1960s China), and with old school brads holding the whole thing together (and putting nice rust stains on the cover). Â I think I paid a whopping 20RMB for it (a little less than $3 USD). Â I was hooked – it was like the Chinese Alibris, but cheaper!

Although I had said I’d be in a buying frenzy as soon as my feet hit Shanghainese earth, it actually took me a couple of months before I remembered the wonderful treasure trove I had been introduced to. Â While I mentioned the site to a number of friends, general skittishness about dealing with the Chinese banking system and other pressing concerns put book shopping on the back burner until this month.

When I finally started poking through the offerings from book stores all over China, I had a hard time reining myself in. Â  Everything was fair game – old journals? Â Check. Â Old practice editions used by Chinese opera troupes in the 1950s and 1960s, like that very first one I had bought? Absolutely. Â Picture book editions (lianhuanhua è¿žçŽ¯ç”») of classic plays? Well, I have been looking to start a book collection of some type for a while …. Â Even less thrilling finds were still exciting. Â Secondary sources I’d found useful for 8RMB including shipping (that’s about $1 USD), books I didn’t even know existed (the collected poems of a 17th century woman poet I adore).

Packages arrive every day – usually little ones, but sometimes big ones. Â Today, a set of the important drama magazine Xiju bao æˆå‰§æŠ¥ arrived, marking the first part of my acquisition of all issues from 1955 to 1966 (which will later be rounded out with late 1970s and early 1980s issues). Â Despite the availability of the magazine in libraries (both here and back in the US) and online, I find there is something so useful about flipping through hard copies of journals and newspapers. Â Our databases make it easy to find every occurrence of a search term with a few keystrokes. Â But it’s so hard to replicate the experience of simply paging through a source and seeing what leaps out when one is dealing in links and PDFs, and I’m thrilled to have my very own copies now.

A lot has changed since my advisors were doing their dissertation research. Â The fact that we now have access to libraries and archives in the PRC is something that was only a pipe dream for a few decades. Â Fantastic online databases mean we can access journals, books, and newspapers from the late Qing on (and, in some cases, things much older than that). Â But I can’t help thinking that one of the coolest things, and certainly quite different, is the fact that I can hop online, type in a few search terms, and get kicked back a list of potential sources – sources that I can buy with my trusty USB key card from ICBC, and that will arrive at my house in a few days, carried by my harried post person (who still screams out my Chinese name at the top of her lungs upon arriving). Â In the past few days, things have shown up on my doorstep that I didn’t even know existed before I found them on the world’s best second hand book website.

I always sit down with my new-to-me books, look through their sometimes crisp, often battered pages, and write my name and date of acquisition on the inside cover. Â It’s an insipid ritual, but there is something that is so wonderful about handling these bits of history (even if I, as a PRC historian, only handle things that are at most 60 years old). Â I’ve always liked the Japanese historian E.H. Norman’s description of the pleasures of the historian (as related by John Dower in Origins of the Modern Japanese State: Selected Writings of E.H. Norman):

On the most simple and intimate level, he spoke (in “History: Its Uses and Pleasure”) of “the magical pleasure that the reading of history can give” – the realization that there is no last word on any given subject; the recognition that when written by the greats, history has the pathos of a Greek tragedy; the dimensions of irony, mystery and poetry; and this: “that peculiar pleasure of reading in the calm of one’s study of turbulent events, of great triumphs and failures or simply of the everyday life of people in bygone ages. To cast one’s mind into the past and to have described vividly for one the passions and ambitions, the hopes and disappointments not only of great men, but of people like ourselves, is to feel an intimation of man’s immortal spirit. (5)

… and can’t help thinking that it’s all the more delightful when kicked back with an aged book that has somehow survived long enough to fall into my hands – here, now, in 2011.

[A revised version of this post appeared on The China Beat on 22 February, 2011. Â It includes more in-depth nitty-gritty on how to shop with Kongfz.com (and illustrates the wide variety of materials you can get for a wide variety of prices!)]

4 comments for “On the joys of book shopping”