The past month has been conference season for this Asianist – and a pretty exciting one, at that! I am feeling both rejuvenated intellectually & yet also melancholy. I relish the opportunity to reconnect with old friends & acquaintances and make new connections, but it reminds me how much IÂ miss some things (and many people). However, it’s been a generally good cap to an almost-over-academic year that has been pretty upsetting for me, personally and professionally – I’m ready to have a summer of work and relative silence, one that I hope will be an opportunity to recenter.

In March, I went (for the first time) to the American Comparative Literature Association (ACLA) conference, where I was lucky enough to participate in a really cool panel called “Retelling Fantastic Tales.” Luo Liang organized a really diverse & interesting group of papers, most focused on East Asia, but also some forays into other parts of the globe. Strangely, it was my first opportunity to sit and talk fantastical tales with other China specialists – ever! I absolutely loved the ACLA format, which is much more like a workshop. I wish more major conferences would follow it; it made for a much more positive experience presenting than the usual ‘2 hour panel with some commentary & audience questions.’ I was also excited to have the opportunity to get feedback from literary scholars on my work – one thing I’ve always loved about my project on ghost opera is that it really does lie at the intersection of several fields. Although my work is very much for China specialists (transnational? What’s that?) – unapologetically so – I do hope that it will be of interest to non-historians, and it sounds like it is. I made some great connections & came home feeling pretty good.

Boston wasn’t too bad, either (also my first time there). The weather was pleasant & I had some really good food – and bad Americanized Chinese food for the first time in, uh, years, but that can be fun, too. And I had a wonderful night out with a friend I hadn’t seen in 9 (!!) years, not since I’d left Taiwan before starting grad school in 2007. It was great to pick up where we left off & to catch up after all that time.

I just returned from the Association for Asian Studies (AAS) conference in Seattle. I wasn’t presenting this year, but I’ve determined that – barring unforeseen financial difficulties – it’s a really important few days for me & I need to make the effort to go, even if I’m not getting a line on my CV. I skipped last year’s meeting in Chicago, and spent the whole conference feeling sorry for myself that I was aloneÂ in Bozeman. AAS is not so much about the conference portion for me (though I do like dropping in on interesting-sounding panels, and of course – the exhibit halls, with university presses running great sales on both new titles and old!), but having the opportunity to reconnect with old friends and meeting new ones. This year was particularly fun, as the American Society for Environmental History was also going on, so my first night in Seattle – when I was feeling a bit grumpy for having some plans fall through – I finally got to meet a Twitter friend for real. We had someÂ amazing food and cocktails and hours of great conversation. We had Skyped previously for work-related reasons, but it was a real delight to have a nice evening out with someone I always thought I’d get along brilliantly with & to no great surprise – I did. I also got to meet up with Nick Stember (aka the translator of that little Star Wars thing) for a quick chat – I hope next time, we’ll have a little more time to talk. But it’s always good putting a real face to the name, especially for someone that had a lot to do with the internet success of theÂ lianhuanhua.

I really liked Seattle – another place I’d never been. A friend took us out to his family’s beach house on Vashon Island – an opportunity to get out of the city – and it was just gorgeous. But it also made me terribly homesick: the combination of a few days of running around AAS & seeing people I hadn’t seen in years, having a big UCSD program get together (where I stood up and said I had always appreciated how special our program was, but IÂ really recognize it now that I’ve moved to being faculty, and how lucky I felt to be a part of such a strong, talented group of scholars), and seeing scenery that was so familiar. I thought of all sorts of little moments of years past, and really mourned the fact that it will never be like that again. I mourned who I used to be (as a friend said a bit wonderingly while we were walking around Somerville in Boston, ‘Taiwan seems like it was just yesterday! But it wasn’t. You were twenty-threeÂ once!’ I was. I was … we all were), since I feel like I’ve lost a sense of myself the past year – I wake up sometimes and am not sure who I am, other than a historian of modern China who does mostly serviceable work and stresses about everything. I wanted a few more days, the opportunity to cram in more time with people who matter to me & who I don’t get to see enough, a few more hours to catch up with people who have seen my ups and downs over the years and still love me, despite the fact I’m a giant ball of stress prone to emotional meltdowns and a pervasive sense that I’m just never going to be enough for anyone, or any institution, or any press. I missed people who weren’t in attendance – my faithful editrix most of all – and a wonderful little conference we had in Santa Cruz the summer I finished my dissertation ….

I’m still mourning. But life doesn’t stop, of course, and we keep moving forward: for now, looking towards the end of the semester, I have a book manuscript to worry about, and adventures to plan for the dog (more popular among my friends than I am!), and a long summer that will inevitably feel too short. 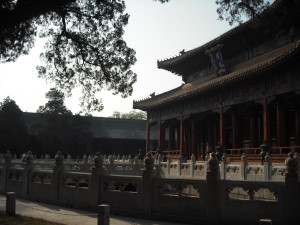 Immediately following on the heels of a family visit (and lots of Kindle reading!), I headed up to Beijing for a work-personal visit, which has actually been really great for work overall (and recharging my batteries in a different sort of way). Â Shanghai has been oddly isolating, particularly after coming off of three years of a small, close knit program and people within easy reach most of the time. Â And, to be fair, perhaps a lot is due to some of my inherent shyness and general dislike of “going out to meet people” (where people mean strangers, without the veneer of some common interest, as at academic conferences) – or even just being friendly with strangers at the coffee shop. Â I’m just generally not feeling up to that sort of personal interaction on my own, nor do I find it pleasurable in the least (not the random encounter in a restaurant or coffee shop). Â In any case, my generalized-yet-subtle angst with the situation seeped into my work (or lack thereof). Â I’m pretty sure I’ve gotten more done this past week than I have done in the past two months!

Some of that is just finding myself in wonderful, well trod old patterns with good friends. Â A cohortmate, actually (meaning we’ve been together since our first fledgling days as PhD students), and her husband; other than the change of scenery and food options, it feels like old times when we lived only a few blocks from each other in San Diego. Â The only thing missing is my erstwhile pit bull, Torres, begging for food & mugging people for snuggles and tummy rubs. Â The pattern of work or hanging out – three people in one room, sipping coffee and tethered to respective laptops, with occasional commentary on whatever we’re doing punctuating the quiet – is familiar from other well-loved friends. Â All told, I feel very at home – which means I’ve been cheerfully humming along with productive, grad student-y things (papers, research, translating, woo). 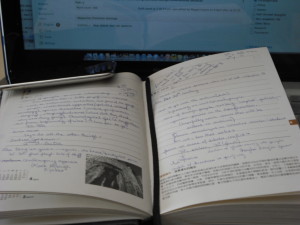 While I can’t package them up neatly and bring them back to Shanghai with me to ensure continued productivity, this kickstart to work is something I will be bringing home – as well as my scribbled notes from my meeting with my advisor who happens to be in Beijing this year (the other is holding down the fort at UCSD). Â I’ve been pretty radio silent since arriving in Shanghai – a not entirely natural state of being for my garrulous, more prone to not shutting up than being too quiet self – and it was nice to lay out what I have gotten done (and get instantaneous feedback). Â My trusty Eslite dayplanner – which I have studiously acquired one of each year since 2006 – has a mere two pages filled, but somehow it’s enough. Â When one is dealing with minds who manage to cut to the heart of a matter in a sentence or two, who needs an entire legal pad?

In any case, I’m feeling revived and like I have a path, which is really the most important thing in making sure my last 6-7 months in China are as wildly productive as they can be. Â Outside confirmation that your gut was right is always good, but so is that very large nudge to get going with stuff you know you needed to be doing anyways. Â It’s also nice to hear that maybe taking a path a bit different from your classmates hasn’t had a totally deleterious effect on one’s research year. Â Being tossed out of the proverbial nest – so safe, so softly feathered, so sheltered from the outside world! – to fend for yourself (kind of) is a rude shock, so it was with great relief I returned to another familiar, well-trod path and pattern: office hours. Â The more things change, the more they stay the same ….

So I’ve spent a lot of time hanging out at “my” desk, listening to new-to-me Renaissance choral music (usually not my bag, preferring plain old lute-‘n-single singer varieties of early music, but it does have a certain je ne sais quoi and makes me long for collegiate architecture Ã  la Princeton), and turning back to Meng Chengshun in earnest (which is paying off by turning up interesting and not-so-interesting phrases and other things – having found what is, to date, the least attractive metaphor for someone longing for a loved one I’ve seen: spitting up pent-up feelings of sadness like a spring silkworm expels threads [of silk] from its mouth).

All in all, I’m finding Beijing to feel more “lived in” than Shanghai (I suppose this makes sense), but I’ll be glad to get home to the Concession and the humidity and a different pattern of life. Â But it’s been a nice first trip to this city I’ve read so much about; we’ll see what the next few days hold. 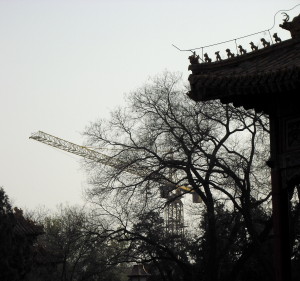