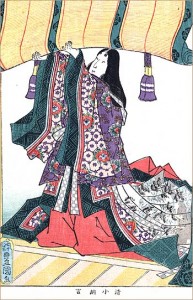 In summer the nights [are most beautiful]. Not only when the moon shines, but on dark nights too, as the fireflies flit to and fro, and even when it rains, how beautiful it is! (Sei ShÅnagon, The Pillow Book, trans. Ivan Morris)

Summer in Shanghai is draining – it’s hot and very humid, and it hasn’t been raining as much as one would expect in the summers (or at least, as much as I was expecting). Nights are not particularly beautiful either, and there are no flitting fireflies, just mosquitos – though evenings are at least a respite from the sun. I’ve survived heat and humidity before; Virginia is no cool paradise come August, and Taipei is on par (at a minimum) with Shanghai temperature and humidity-wise – but it seems particularly unrelenting here. Rain storms were a near-daily occurrence in Taipei, which makes summer more bearable, and Virginia at its worst was the equivalent of a normal day in Shanghai. Which is to say, I’ve felt like doing precious little other than hibernating in air conditioning. I think the weather has contributed to my terrible case of incompletitis – the inability to finish anything. Oh, I’ve met immovable deadlines when I’ve come up against them, but it’s all that more flexible stuff: for instance, I have no fewer than five unfinished blog entries languishing in my queue. I’ll get around to finishing them … maybe.

In any case, it’s the home stretch here (I booked my tickets to fly back to the US in October – and I’m thrilled to bits at the prospect of being back in California in a smidge over two months!), and I’ve been good and working a lot. I was lucky enough to host a good friend who came down to use the wonderful Shanghai municipal archives (ä¸Šæµ·å¸‚æ¡£æ¡ˆé¦†) and soak up some of the French Concession atmosphere. It was a delight to have someone else to go archiving (after we had our morning coffee & breakfast, of course) and try new restaurants with, squeal over sources to, and gossip. I’m not used to having roommates, having had my last one at the age of 20 or so, but it’s a nice change for a few weeks – mostly because I am not used to being alone for extended periods, and in truth, it’s been one of the most difficult things about this year abroad.

But, having caught a summer cold and piled loads more activity than I’m used to on top of it, I’ve taken a few days off to lounge around the apartment, recover, contemplate cleaning (and do a bit of actual tidying), and play some videogames. I’ve been flip flopping between a few things, but currently I’m playing through ÅŒkamiden, the recent ‘sequel’ to ÅŒkami. It’s cute, though the graphics can get a bit choppy at times – but I do think the drawing mechanic is quite suited to the DS. It works better (for the most part) than it did on the PS2 or Wii, even. Still, mostly I’ve been playing through and wishing I could pick up the original again. 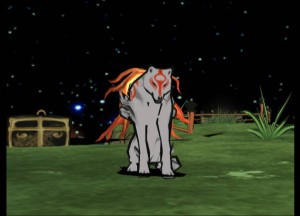 ÅŒkami is – and will probably always be – the only game I played (not once, but twice) because I found the aesthetic experience so damn pleasurable. It was the look that got me interested in the first place, and it was the environment that kept me playing a game that wasn’t always very good. But I was so impressed with the visuals and the idea of the gameplay linked to the tactile pleasure of writing. I loved the way the ink (‘smoke’) pooled at the tip of the brush, and the way mountains were simple outlines on the sky.

There was a certain joy of movement in the Wii version. I generally dislike the ‘Wii waggle,’ and find it excruciating when it pops up where it just doesn’t fit (particularly awful execution of Wiimote action in one game I played caused me to put the game aside totally rather than face 30+ hours of waggling my way through a JRPG). I flicked my wrist in the middle of an ÅŒkami battle, and the wolf dodged smoothly. It was elegant – more importantly, there was a connection between that little flick of the wrist and the movement on screen. It was the first time I had played anything on the Wii and gone ‘Oh, well. That was nicer than I would’ve gotten out of my standard controller.’ This is a bit funny, of course, because a lot of people criticized the lousy control scheme. I found that the learning curve was sharper, but once I got the hang of it, it worked brilliantly for me.

I liked touring the countryside; it was a pleasure to go galavanting about scenery that struck a balance between drab realism and candy-coated fantasy. There was a solidness to Amaterasu’s movements, but it never turned stiff and clumsy. Animals so frequently come off poorly in games – most representations of equids leave me aghast at the fact that anyone could think any horse-like creature could ever look like that – it was nice to see one that verged on believable. Perhaps it shouldn’t be surprising that the believable wolf was set in an unbelievable setting? The world of ÅŒkami is not ‘realistic,’ but maybe that’s why Amaterasu’s mannerisms and movements were often so real (and delightful): she was totally unburdened by the need to be ‘realistic,’ as were the things that surrounded her.

Leigh Alexander wrote a nice piece for Kotaku a few months back entitled “Why Don’t I Lose Myself in Games Anymore?“:

When games were more abstract-simple designs and massive worlds with yawning gaps in between each fragile plot point-they engaged us more, because they became worlds we could own. When all of the work of creation is done for us, when every element of lore is written in, when every object in the game world is explicable and available for interaction, there’s nothing for our hearts and minds to do except ride along. And that’s beautiful and well, but it’s just not very engaging.

Now, Leigh is speaking to the structure and plot and characterization, but some of the underlying issues here are the same, I think. It’s the gaps that capture our attention (how many people have hated big screen versions of favorite books, where someone else’s vision is played out – partially or wholly at odds with the world and characters you’d built in your head?) and allow us to fill in the blanks. The fact that ÅŒkami‘s art style was somewhat literally fuzzy around the edges is what let her become ‘real’ (at least in my eyes). Those yawns, side flops, ear scratches, tail wags, and countless other minute movements could have become bogged down in details in a game striving for realism.

All of this got me thinking about a conference presentation I saw over a year ago, at a conference I also presented at. The presentation was on early 1960s “ink painting animation” (shuimo donghua æ°´å¢¨åŠ¨ç”»), in particular two films from the noted animator Te Wei ç‰¹ä¼Ÿ. We watched clips from the 1960 release Tadpoles looking for Mama (Xiao kedou zhao mama å°èŒèšªæ‰¾åª½åª½) and 1963’s The Cowherd’s Flute (Mu di ç‰§ç¬› – the Youtube title below is wrong regarding the date). I won’t bore with details of the political maneuvering that make these two films resonate with my research on early ’60s drama, but beyond their historical significance, I found them absolutely enthralling. I’d never seen anything like it.

Of course, if all animation in China looked like this, or all games went for the fluid, the minimalist, the purposefully unrealistic, it wouldn’t be special. On the other hand, it’s less about the stylistic particulars and more about the idea of staunching the flow of this wanting-so-badly-to-be-real-that-it-hurts, which is in a lot of cases simply taking away space for imagination. It can become dull, stiff, and boring. There is something to the openness, the literal blank spaces – more room to maneuver. My favorite example of this is around the 2:00 mark below, where ‘water’ is not much more than totally blank space.

(Part two can be found here) I watch a lot of contemporary Chinese cartoons, and I doubt many of them will stand the test of 50 years like The Cowherd’s Flute (that’s for the commercial stuff, of course – there is a whole slew of independent animation, but I don’t think many people are watching, sadly). I wonder how many of the types of works that entirely spell out a world for you will be able to? There is a lot of flexibility in gaps, a lot of room for people to fill in their own present.

I opened with Sei ShÅnagon – her Pillow Book (finished sometime in the very early 11th century) is rightfully famous and I have loved it for over half my life. It’s absolutely contrived in some respects (parts of it were revealed at court, and there was editing, rewriting, and shuffling going on), but it’s such a great hodgepodge of stuff. She was witty, catty, and immensely talented – which is what makes her work such a fascinating historical record. But the thing I like most are her lists. Sometimes she expounds rather lengthily (here, part of a list on Hateful Things):

A lover who is leaving at dawn announces that he has to find his fan and his paper. “I know I put them somewhere last night,” he says. Since it is pitch-dark, he gropes about the room, bumping into the furniture and muttering, “Strange! Where can they be?” Finally he discovers the objects. He thrusts the paper into the breast of his robe with a great rustling sound; then he snaps open his fan and busily fans away with it. Only now is he ready to take his leave. What charmless behavior! “Hateful” is an understatement.

Equally disagreeable is the man who, when leaving in the middle of the night, takes care to fasten the cord of his headdress. This is quite unnecessary; he could perfectly well put it gently on his head without tying the cord. And why must he spend time adjusting his cloak or hunting costume? Does he really think that someone may see him at this time of night and criticize him for not being impeccably dressed?

And sometimes she just offers her opinion without commentary: 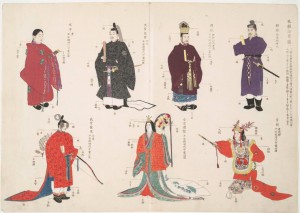 Who among them was a robe rustler? (From the NY Public Library site; the Kokushi daijiten)

Lists, observations, opinions, records of a life. An eleventh century LiveJournal, if you will.

One reason Sei ShÅnagon has stood the test of time so well is because her writing is ‘fuzzy around the edges.’ It isn’t that there aren’t tons of particulars that alert you to the fact that we are in the past (where, to quote L.P. Hartley, ‘they do things differently’). That’s one key to its enduring popularity: the time capsule effect. But somehow, the Japanese noblewoman who lived over a thousand years ago wrote passages that seem as though they could have been pulled from today. It’s the fuzzy bits that can’t be tied to specific periods, the parts that make you want to ask questions (what was so elegant about duck eggs? has been one of my perennial, flippant favorites) and make you think. That’s the other key, and probably the more important one, at least in terms of keeping translations of her work on shelves across the world. She resonates with today (whenever that today may be).

Even if she did leave one important thing off her list of why in summer, nights are the most beautiful: cicadas and roosters shut up for a few hours!