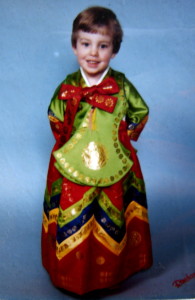 In hanbok (traditional Korean dress) – though the bow is tied wrong! – a long, long time ago

I was born in Seoul, Korea, and eventually found my way back to Asia during college. Despite a passionate love affair with Latin, I found a more stable intellectual love in history – following in the footsteps of my mother – Â and was lucky enough to land in a great department at University of Mary Washington in Fredericksburg, Virginia. Serendipitously, Professor Susan Fernsebner arrived to teach Chinese history at the same time I was wondering what kind of history I was going to specialize in for grad school. I read Lu Xun’s zawen, Dorothy Ko’s writings on Jiangnan women of the Ming-Qing period, watched films from the golden age of Chinese silent film, and it was all over for me – I’d found my second great intellectual love affair.

After a stint in Taiwan doing language training in Mandarin Chinese at the International Chinese Language Program, I began my doctoral studies at UC San Diego, where I was co-advised by Professors Joseph Esherick and Paul Pickowicz. I spent 2010-2011 based in Shanghai while researching my dissertation, supported by a Fulbright-Hays Doctoral Dissertation Research Abroad fellowship. Along the way, I started blogging for the videogame culture and news site Kotaku, where I worked from 2007 to 2008. There, I was introduced to the wild and wonderful world of game studies, which is an interest I continue to nurture – particularly in combination with my training as a Chinese historian. It was good training in how to keep one’s self and one’s work accessible beyond the bounds of one’s field or the Ivory Tower – something I strive to do in this space, at least occasionally.

I am currently an associate professor in the Department of History, Philosophy, and Religious Studies at Montana State University, in beautiful Bozeman, MT. 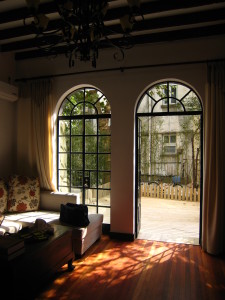 My Shanghai apartment in the French Concession