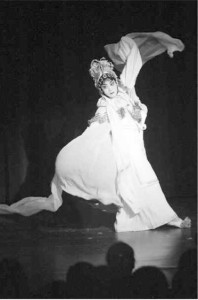 Despite far flung (some might say a bit schizophrenic, even) interests, academic and otherwise, that usually mean I have my hand in a couple of different areas at any given time, I’m prone to bouts of obsessing – particularly with media (music, games, books, bits of literature). Â Of course, it’s cyclical – I can go months without finding myself obsessing over any one song, routinely go months without even looking at a videogame, and usually devour enough literature (both for pleasure and research) that my brain is a jumble of lots of information.

Still, there are lots of things that I find myself circling back to (or getting led back to inadvertently), fueling the obsession. Â I joke that the defining character of my career is likely to be mÃ¨ng å­Ÿ, since it keeps appearing over and over again. Â My favorite ancient philosopher? Â Mengzi (å­Ÿå­). Â The author of the play I’m currently translating? Â Meng Chengshun (å­Ÿç§°èˆœ). Â The name of one of my favorite friends and fellow Asian studies scholar (and font of all good things, musically)? Â Menghsin (å­ŸèŽ˜). Â The name of one current research focus? Â Meng Chao (å­Ÿè¶…). Â While you could say that meng is a pretty common character (it is a last name, among other meanings, after all), there are plenty of common characters – so sometimes I can’t help but feel that there’s something with me and meng. Â When I get worked into obsessive frenzies, I sometimes stop and think, “Maybe I’m supposed to be hung up on this at the moment.” Â Who knows where it might lead?

I stumbled on to Meng Chao with the help of Ye Wa, our utterly wonderful and totally brilliant prof who helps us slog through the difficult bits of Chinese documents while we work on our yearly research projects (back in the halcyon days of coursework). Â In the winter of 2009, I was on the hunt for a research topic and came back to one of my favorite Ming dramas (which has proved to be a bit of an obsession over the years, both textually and musically), The Peony Pavilion (Mudan ting ç‰¡ä¸¹äº­). Â I initially wanted to look at the status of the classic opera after the Cultural Revolution, but quickly discovered it really had been in need of a revival in the 1990s – it simply wasn’t being performed in the 1980s. Â This meant very few sources – not a very promising basis for a research paper!

I went back to square one, sorted through a bunch of post-Cultural Revolution xiju nianjian æˆå‰§å¹´é‰´ (drama yearbooks) and entered every play performed by every kun opera troupe from 1979 to 1989 into a spreadsheet. Despairing over ever being able to look up the hundred plus plays I had now listed out, I asked Ye Wa to take a look at it. Â She immediately noticed Li Huiniang‘s presence, and gave me the quick and dirty introduction (famous new edition ghost play from the early ’60s, the play and its author criticized during the early part of the Cultural Revolution, like Wu Han’s Hai Rui Dismissed From Office (Hai Rui baguan æµ·ç‘žç½¢å®˜)). Â Going home and checking JSTOR, I noticed that – unlike Wu Han or Tian Han’s stories – very few people even mentioned the play (or the author). Â Topic: found!

At some point I found myself receptive to Ye Wa’s suggestion that it would be a fine dissertation topic. Â I genuinely enjoyed researching the play and its author, I liked the idea of taking on a topic that let me indulge in my fondness for interdisciplinary work and return to my classicist roots (that is, playing with literature – and lots of it). Â Besides, ghosts are a pretty sexy topic. Â I’ve found myself at more that one gathering with non-Chinese historians, and people’s ears generally perk right up when I say I study Chinese ghosts (which isn’t the most precise way of putting it, but close enough). Â Having a topic that doesn’t instantly put people to sleep is never a bad thing.

So that’s how I wound up based in Shanghai, researching ghost operas, kun opera, and their authors and artists – I rather doggedly held to my deep affection for China’s most famous ghost play, and with some help from Ye Wa, found my next ghostly obsession. Â Doesn’t sound so obsessive, really, but I’ve found myself coming back again and again to Meng Chao. Â Some of it is certainly due to my uncertainty upon being confronted with the whole range of Chinese libraries and archives – I know Meng Chao’s story backwards and forwards. Â Using his story as a marker is one way to at least continue making progress when most of me is going “Where am I, how did I get here, what am I doing, and where do I go from here?”. Here’s where having an obsessive streak is probably a good thing: in running down every bit of information I can get my hands on regarding Meng Chao (not just because I need the stuff as sources for my dissertation, but because I must have it, just because), I’ve been running down of every bit of information I can get my hands on regarding his friends, associations he was involved in, things he worked on. Â What this means is the number of primary and secondary sources that have only the barest connection to Meng Chao, and some with none at all (ranging from novels and poetry collections to edited volumes on the 1930s literary societies), are piling up daily.

Which leads me to my next obsession (which has been running about as long as I’ve been nurturing my historian’s affection for Meng Chao, and is intimately tied to how I approach this research project) – it’s not an obsession so much as an ever-present bit of literature that I’m reminded of on a near-daily basis. Â At the same time I was digging into Meng Chao and Li Huiniang initially, I reacquainted myself with T.S. Eliot’s Four Quartets, particularly part one, “Burnt Norton,” which has the following lines:

What might have been and what has been
Point to one end, which is always present.
Footfalls echo in the memory
Down the passage which we did not take
Towards the door we never opened
Into the rose-garden. My words echo
Thus, in your mind.
But to what purpose
Disturbing the dust on a bowl of rose-leaves
I do not know.
Other echoes
Inhabit the garden. Shall we follow?

I actually have the last two lines engraved on my iPod. Â The poem brought to mind a whole host of associations – from Peony Pavilion‘s famous section, “Walking Through the Garden” (Youyuan æ¸¸å›­ – one of my very favorites), to a bunch of things I’ve read with my Japanese history professor relating to time, to Meng Chao. Â I always read it and think of Ye Wa saying Meng Chao was a good starting point to get at a lot of other cultural figures in the early PRC – the other echoes inhabiting the garden, if you will. Â And having fallen academically for a mostly neglected figure (most people, even in China, have never heard of him, though many have heard of the play he wrote), I frequently feel that I’m kicking up a lot of dust – and for what purpose, I’m not quite sure yet.

Obsessions are selfish. Â At the moment, I’m selfishly building up my collection of Meng Chao-related materials – partially for the simple reason that I feel really bad for the guy. Â A beautiful writer, someone who moved among more famous names and was an intellectual equal, but never hit “household name” status, and someone who (like a lot of others) suffered mightily during the Cultural Revolution – and who seems to have been mostly forgotten by just about everyone. Â Why doesn’t anyone remember him? Â Where is Meng Chao’s collected works volume? Â It seems like practically everyone else in this country has one! Â (I continue to nurture a secret hope, that someday, somehow, he’ll get his own wenji æ–‡é›†)

So while going about my daily business of collecting materials and figuring out what, exactly, I’m collecting materials on, I try to keep in mind a few things: some of this is purely for selfish interest in a person I’ve written on (thus should not be the sole focus of my hunting, which I’ve done a good job of remembering). Â Some of this is part of an obsessive collecting spree, but is, in fact, leading to other useful things that gradually spiral away from my little nucleus of a mostly unknown author. Â And finally, some of this is the intellectual equivalent of opening doors that haven’t been opened in a long time (if ever), and doors all lead somewhere – if not always to the expected destination.

Other echoes do indeed inhabit the garden, and I intend to follow them – and I won’t mind disturbing a bit of dust along the way.